The Winding Road to the American Cheese Society Conference 2017

Years ago I contacted the American Cheese Society to see if I could become a member.  At the time the only option open to me was to become a “Cheese Enthusiast” member, now flash forward several years and I am now a full “Industry” member and I attended my first conference and brought home an award for one of my cheeses.

The idea of attending the conference and entering cheese, started back in November of last year.  I hosted a few sales reps from the Enzyme Development Corporation (EDC), the company that I get my cardoon enzyme I use.  I showed them how I had been able to make cheese with the enzyme on a commercial-scale, albeit way smaller than the larger cheese producers.

I left our acreage around 12:45 am, I had to catch a 6:10 am flight to Denver, plus clear customs.  Fun times.  I learned a few things about Edmonton International Airport at 3:30 AM

Tim Horton’s only has Coffee before 4:30 AM – Plus it was my last bit of Canadiana before my trip.

The flight was uneventful and landing in Denver was easy.

I collected my bags and took a train to Union Station and waited for a friend from the EDC to pick me up.  We spent some time at his place before the last member of our group arrived.  Denver, though a city large enough to have 4 pro sports teams, still has a small town feel to it.  I have to say the views are spectacular as well.   I attended the new member/attendee meet and greet that evening.

The first day was an amazing day of learning and meeting some of my cheese heroes.  As an added bonus I was able to meet a few people who I had only communicated to via social media.  The Keynote speaker, Jim Davison, spoke about Leadership and Resilience based on his experiences on Mount Rainier and Mount Everest.  He was a perfect speaker for this conference given the economic challenges everyone faces in the cheese industry.

In between stints at the EDC’s table I attended a session on “Pairing Beer and Cheese”  and later that night I was treated to one of the best steaks I have had in my life, and given I am from Alberta that is saying something. 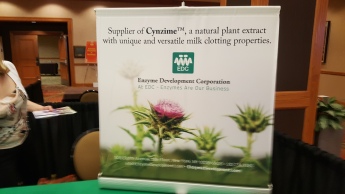 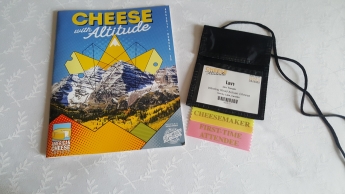 My Guide Book and my Pass 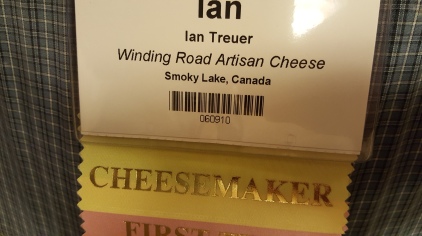 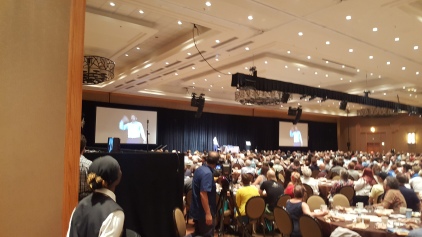 Our Keynote Speaker, Jim Davidson, was a perfect choice.

A nice citrusy hop from the beer and cheese pairing session 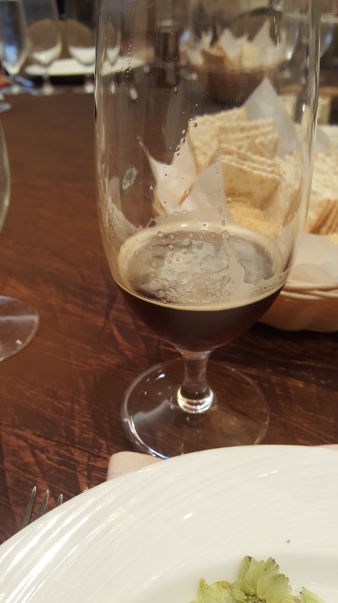 Once of the best Brown Ales I have had

This Goat Cheese paired well with the IPA 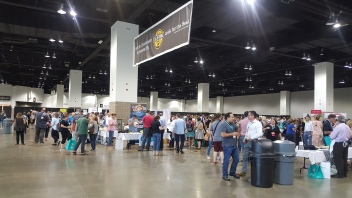 This little, blink and you miss it, place was home to one of the best steaks I’v ever had.

Day 2 (Morning and Afternoon) – The Day Of Days or The Calm Before The Shock.

Day 2 is where I discovered that what can make you tipsy at 1.6 km (1 mile) above sea level, is less than what it takes you at your home town (600 m above sea level) so I was a bit rough the next morning.  I also discovered that Biscuits and Gravy are the cure-all for ones first hangover in a decade.  I had a few meetings and then we went to a session called “Far Out! Unconventional Cheese Pairings”  I was sceptical given the description mentioned something about Fruity Pebbles.  It turned out to be an amazing session and opened my eyes to a few new combinations that I never would have thought of.

The Cheese was already paired with some interesting things

Cheese Sushi, what is not to like. The flavour was good, but you end up chewing on nori after the cheese had melted away.

Challerhocker, pronounced “holler hocker”, with a pickled brussels sprout. even the non-sprout lovers agreed this was a perfect pairing. I can’t wait to try it with our Josef.

This was a smoked blue that was topped with a sour cherry, perfect match, on a salted chocolate graham cracker (not a perfect match – it overpowered the cheese) 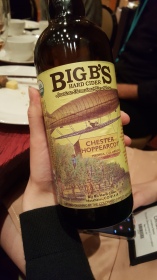 A Hard cider paired with the Camembert. This was a perfect match

A Chocolate Cocktail was pared with Challerhocker, It was OK, I found the drink a little bitter.

Smoked Blue with “Yogi’s Egyptian Tea”. I adored this pairing. The tea had notes of black liquorish and finished with a minty note that went up your nose.

At 5 pm we were herded into the main conference area, Cheese Makers were asked to sit on the right hand side of the room.  I realized afterwards it was so they could get to the stage easily and keep the awards ceremony moving along.

A little perspective on the awards.  There were 2024 entries in 123 categories, from Canada, Columbia, Mexico and the United States of America.  Each cheese is judged on its own merit, not against the other cheeses in their category.  Cheeses are judged by two judges, a Technical and an Aesthetic Judge.  Cheeses are scored out of 100.  The Technical Judge starts out with 50 points and takes away points for flaws, the Aesthetic Judge starts out with 0 points and adds points, up to 50, for good characteristics.  The scores are combined and that becomes the cheese’s total score out of 100.  Easy, right?  Well on top of that you have to meet a minimum score to place 1st, 2nd or 3rd.  There were a few categories where no wards were given out, and a few were there were only a 2nd or a 3rd place awards given.

As the awards started, they go fast and they have to with 123 categories, I was in awe watching some of my “Cheese Heroes” take home awards.  Seeing the large contingent of California Cheese Produces, proudly waving their state flags when one of their own take home a ribbon.  I was seated next to Chris Osbourne, the Cheese Maker at Blackberry Farm in Tennessee, really excited as he received 3 wards for his cheeses.  He nudged me and said “this is your Category!”  I had two cheeses in two washed rind categories.  I was sure that as a first time entry none of my cheeses would even place.  They announced a 2 way tied for 3rd place, both cheese companies are ones I look up to, and then I though, well we have another cheese in another category, lets see what happens there.  I then received another nudge from Chris and I looked up to see this on the screen.

I was in shock and I exclaimed a comment, a little to loud, that was very un-Canadian.  People around me laughed and understood my shock, because at one point they were in my shoes.  To be honest I was a giggling idiot when I picked up my ribbon.  I was greeted near the bottom of the stage by my fellow Canadian and friend Kelsie, who was there to give me a huge hug.  I am not a hugger by nature, but it was welcomed as it helped me to start processing what just happened.  Our other cheese did not place, it was the next category announced.  I started texting and emailing various people to let them know.  For the first time since I arrived at the conference I felt like I belonged with these group of extraordinary cheese people.

After the awards, and the reception afterwards, a few of us Canadians and new American Friends headed out for dinner.  I called it a night around 10 PM and tried to get some sleep.  We still had day 3 to get through.

I don’t recall much from this day, other than we had a meeting at lunch, I attended a session on pairing beer, chocolate and cheese, it was ok but I did not like a few of the pairings.  Oh and the festival of cheese, yes a chance to sample all the cheeses entered in the competition.

We arrived shortly after it opened to ACS Members.

There were these amazing cheese carvings you could vote on.

All the cheeses were put out by their categories.

I beelined for the Washed Rind table. We found Josef, I am interested in seeing the judging notes.

Of course we had to find RDB.

I was a bit picture happy about our cheese. 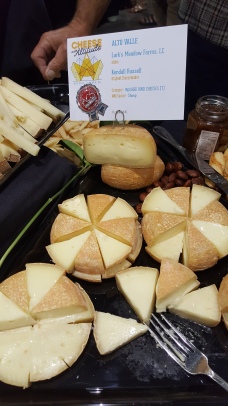 I had a chance to me Kendel who made a sheep milk washed rind using the same cardoon enzyme. It was amazing. He placed 2nd in his category.

Greensward came in first in our category and I understand why it did. Amazing cheese.

I had to take a picture of our name in the program.

This was an amazing experience and I am still in a little shock about our showing in the competition.  I wanted to thank the Enzyme Development Corporation for sponsoring my trip, my assistant cheese maker Alex for handling everything while I was away, my business partner Aurelio, and my Wife and Family for following me while I chase this crazy dream of mine.

← Almost A Year On The Winding Road or How The Time Flies!
Making Cheese in La Belle Province – Part I →

© Ian Treuer and Muchtodoaboutcheese.com 2013-2019. No material may be copied from this site without expressed written permission from the author. All rights reserved

Much To Do About Cheese Store

Much To Do About Cheese Classics