In country as big as Canada there are bound to be cheeses that never leave their home regions or are not known well enough by local cheesemongers to bring them in.  Thanks to an internet cheese friend, yes that is a thing, I was lucky enough to sample some great Ontario Cheeses that don’t make it to Alberta, well Edmonton at least. 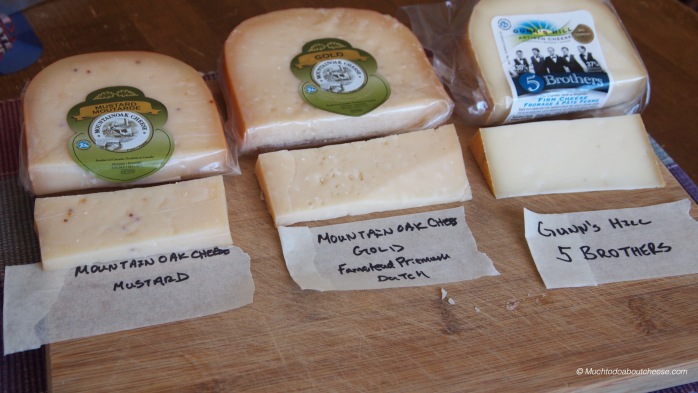 I want to thank Kelsie Parsons for bringing these great cheeses from Ontario on his recent trip out west for work  Kelsie was the Official Cheesemonger for the 2014 American Cheese Society Conference and is currently putting the finishing touches on his book about Artisan Cheesemakers in Canada.Of these three cheeses two were from Mountainoak Cheese , the other was from Gunn’s Hill Cheese and this is the one I want to talk about first.

Gunn’s Hill Cheese is in Oxford County,  near Woodstock, Ontario.  I have had the pleasure of sampling a Gunn’s Hill Cheese before, Oxford Harvest, which made me an instant fan.  I have always wanted to try 5 brothers, which according to their website, “..combines traits from Gouda and another Swiss variety called Appenzeller” and given my Josef is based on an Appenzeller I was intrigued.

I was not disappointed by this cheese.

The other two cheeses were from Mountainoak Cheese, One was an aged Gouda with mustard seeds and the other was their Farmstead Premium Dutch Gold which is an aged Gouda as well.

Lets go with the Mustard Seed Premium Dutch Gouda first, this cheese surprised me.  Normally I loath any cheese with bits of this and bits of that in it.  This cheese has made my exceptions list.

I could not stop eating this cheese.

Finally we come to the Farmstead Premium Dutch Gold

This is the cheese that got me to stop eating 5 Brothers.

I cannot thank Kelise enough for bringing me these cheeses and I am finally getting around to finishing the last of them as I type this post.  I think I will be speaking to a few of the cheese shops in Edmonton to see if they can get these in their cases soon.

← Blue Cheese – The Taste Is Kind Of Growing on Me!
Wordless Wednesday – Yukon Raft(ing) →

© Ian Treuer and Muchtodoaboutcheese.com 2013-2019. No material may be copied from this site without expressed written permission from the author. All rights reserved

Much To Do About Cheese Store

Much To Do About Cheese Classics